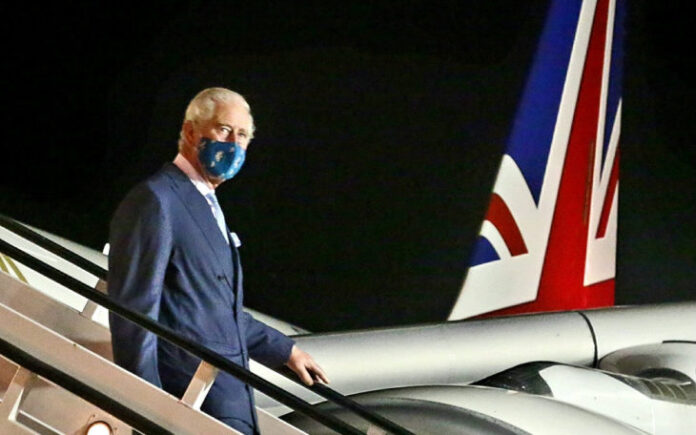 Bridgetown, Barbados: His Royal Highness Prince of Wales arrived in Barbados for the republic celebration of the island.

The Prince arrived at around 11:45 pm on November 28, 2021, at Grantley Adams International Airport, where he first met with the Governor-General and President-elect – Dame Sandra Mason, who in turn introduced him to Prime Minister Mia Amor Mottley, Foreign Affairs Minister – Dr Jerome Walcott, Maritime Affairs Minister – Kirk Humphrey, the British High Commissioner to Barbados – Scott Furssedonn-Wood, and several other officials.

Furssedonn-Wood cited, “I spent four years travelling with The Prince of Wales. Now I have the honour of welcoming him to Barbados. It’s the first time I’ve seen a Royal arrival from this perspective”.

The Prince took the salute from members of the Barbados Defence Force with Dame Sandra to his left and prime minister Mottley to his right. The national anthem of the island was also played by the police band.

Barbados will officially remove Queen Elizabeth II as its “Head of the State” on its Independence Day and will join the list of republic nations.

Celebrations for this massive day or occasion is going in full swing on the island.

With Barbados becoming a republic state, the number of countries that are under the rule of the Queen would decrease to 15.

In addition to this, the government informed the general public that all the government-operated COVID-19 vaccination centres were closed ahead of the preparations.

With this, ‘Sandra Mason’ will script history by being the first-ever President of Barbados island, as she managed to achieve the two-thirds support of the house to become the first President.