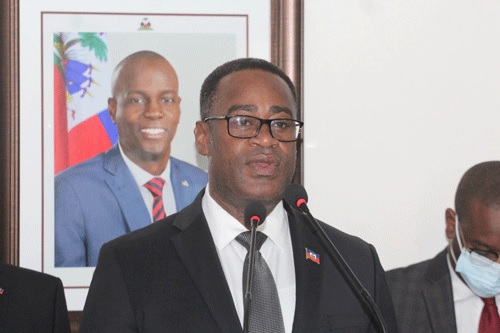 Berto Dorcé was sworn in as the new Justice Minister of Haiti. He promised to give his service to establish a strong, independent, efficient justice system.

He was appointed last Wednesday by the Prime Minister Ariel Henry to re-shuffle his Cabinet appointing eight new ministers in a Cabinet that now only includes four women, one less than before in the 18-member Cabinet.

Dorcé cited, “We are doing the maximum with the funds that we have available to restore the authority of the state and put away the ones that need to be put away. One of the main responsibilities of Haitian government is to create a safe & stable environment”.

The new justice minister stated that he would prioritize to deal with the spate of kidnappings by armed gangs, security, elections, the fight against prolonged preventive detention and land insecurity.

The Caribbean island is at present dealing with the increasing gang violence, poverty crisis, hunger crisis, fuel shortage and COVID-19.

A few days back, amid the turmoil situation on the island, Haitian Prime Minister Ariel Henry has appointed his new Cabinet, who was sworn in on Wednesday.

While addressing the new Cabinet, the prime minister cited, “You accepted this under difficult conditions. We are doing maximum with the funds that we are having to restore the authority of the state & put away the ones that need to be put away “.

Earlier, addressing the issue of fuel shortage, the leader informed, the Haitian government has invested ‘tens of thousands of dollars to subsidize gas, but it cannot maintain that situation much longer.

In the meantime, critics have rejected the Cabinet re-shuffle with a former legislator, Steven Benoit, calling it an “improved version” of the Tet Kale party, acknowledging that this ministerial cabinet “is the same regime which has been in power since 2011”.