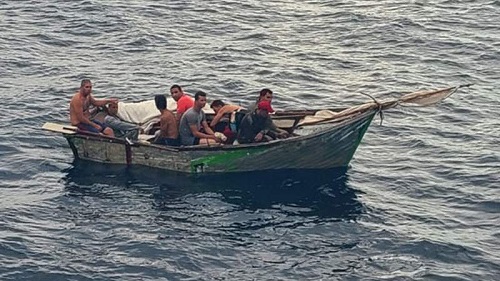 Cuba: Twenty-two Cuban citizens have been repatriated to Cuba by the United States Coast Guard on Saturday, following 3 – interdictions off the coast of Dania Beach and Key West.

While on a regular patrol, the Coast Guard – ‘Cutter Ibi’ crew notified Coast Guard Sector Miami watchstanders at around 9:05 am on Monday of a metal ship with 8 people aboard nearly a mile east of Dania Beach. They were then brought aboard Coast Guard Cutter Isaac Mayo and reported in good fitness.

A Customs & Border Protection Air and Marine Operations aeroplane crew informed the Coast Guard Sector Key West watchstanders around 9:20 am on Tuesday of a white foam ship with five people aboard approximately 55 miles southwest of Marathon. They were brought aboard the -Cutter Isaac Mayo and reported in good health.

A good Samaritan notified Sector Key West watchstanders nearly 3 pm on Wednesday of an artificial sailing raft with 9 people aboard approximately nine miles south of – Big Pine Key. After that, they were then brought aboard the – Cutter Isaac Mayo and in good health.

In addition, the Caribbean island is battling with the COVID-19 outbreak and now has become the first nation in the world to give COVID-19 vaccines to toddlers with its home grown vaccine.

As per to the statistics, the island country has reported more than 793,000 confirmed cases of the deadliest COVID-19 mutant while more than 6,733 lost their lives.

If we look at the vaccination statistics, so far, there are a total of 7,708,885 individuals who have received their first dose of the COVID-19 vaccine, which is around 68.0 per cent of the total population. In comparison, around 4,457,783 individuals have received their second dose of the COVID-19 vaccine and are fully vaccinated now against the mutant.