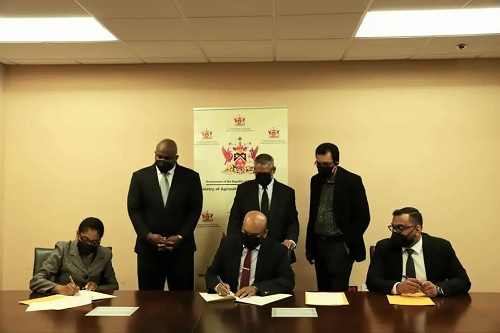 Trinidad and Tobago: Around 20 young farmers from South Trinidad have been allocated a 40-acre block of State land in Petit Morne, St Madeleine, the Minister of Agriculture, Land and Fisheries, Clarence Rambharat.

The Agriculture Ministry announced, following the signing of a Framework Agreement between the Ministry of Agriculture, Land and Fisheries and the Rural Development Company Limited on Wednesday, 12th January. This allocated land will further be developed into 2-acre parcels for the purposes of agriculture.

The agreement treats with the provision of procurement and project management services in respect to the development of the 40-acre block; it also provides for the relocation of 18 farmers, whose agricultural holdings along the Marabella Train Line (South of the Petrotrin Refinery) were affected as a consequence of the construction of the Waterfront Development in San Fernando.

Also included in the current arrangement are two additional farmers from the San Fernando area, both of whom, according to Minister Rambharat, were affected by precarious land tenure agreements, incidents of theft and adverse weather conditions, despite their significant strides and financial investments in agriculture.

The Minister also noted that while the agreement makes provisions for the development of the 40-acre site for the purpose of relocation, the project will be one (1) of the three (3) blocks in Petit Morne, which comprises over 290 acres. The Government is earmarking the other two (2) blocks for the development of the Homestead Programme and the Greenhouse Project in the future.

In terms to the Greenhouse Project, the Minister asserted, “The idea is to develop Greenhouse facilities that will give young people, in particular, the opportunity to move away from traditional agriculture to that of protected farming. To this end, the Government has entered into a partnership with the Chinese Government to provide technical advice on greenhouses with the aim of having these deployed across the country”.

“The intention is to involve NAMDEVCO in the initial phase and then subsequently engage the RDC to partner with us”.