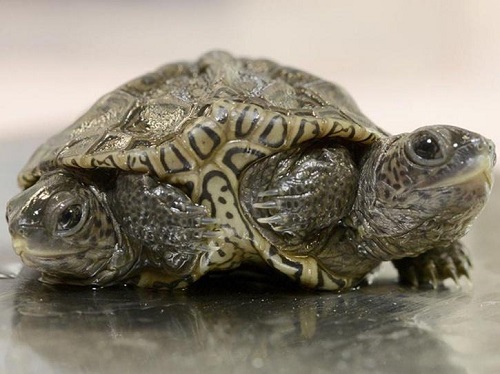 The experts at the New England Wildlife, this turtle is similar to the conjoined human being twins, which means that they share some parts of the body but also have few other parts that are independent.

The surprising element is that the heads of the turtle work separately to come to the surface to breathe. Besides this, the turtle is also having two spines that join together at a point. Turtle’s each side is having control of three legs.

The Birdsey Cape Wildlife Center shared via their Facebook post that cites that, “It is a rare anomaly which can occur from both genetic and environmental factors that influence an embryo during its development.”

The post further added, “It is similar to the cojoined twins of human beings sharing few parts of their body but also have some parts that are independent.”

“In this case, they have two heads and six legs. On admission, both the sides were very alert and active, and our veterinary team was eager to learn more about them,” the Wildlife center stated.

The center added that usually, animals with this rare condition do not always survive very long or live a good quality of life, but these two have given the center a reason to be optimistic.

“They” have been in our care for just over two weeks and continue to be bright and active. They eat, swimming, and gaining weight each day. It is impossible to get inside the heads of these two, but it appears that they work together to navigate their environment,” the post added.

The non-profit organisation is also declared that it will have a CT scan in the future when the baby turtle will be a little bigger.