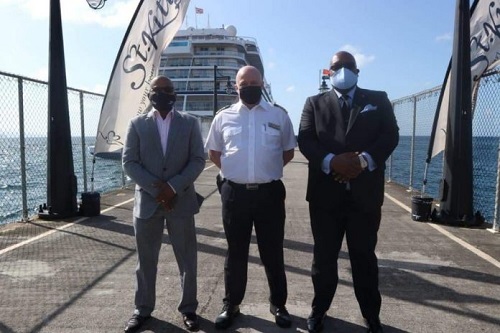 St Kitts and Nevis: ‘Viking Orion’, an ultra-luxury ship from Viking Ocean Cruises has arrived in St Kitts and Nevis on Monday. This is the fourth cruise ship that docked at the Port Zante and was welcomed by Prime Minister Dr Timothy Harris along with the other officials.

The cruise will visit the shores of the twin island ten times in the winter season of 2021-2022.

The Minister of Tourism, Transport and Ports – Lindsay F.P. Grant, during the inaugural call, stated that this visit by the ‘Viking Orion’ depicts the strong relationship as well as demonstrates Crusie liners’ confidence in St Kitts and Nevis.

‘Viking Ocean Cruises’ is the largest luxury cruise line and even was voted number one in ‘Condé Nast Traveler’s 2021 Readers’ Choice Awards. The Viking Orion is sailing from – Ft. Lauderdale, Port Everglades, on a 14-day cruise itinerary on which the cruise visited St Kitts on its third day.

The Viking Cruises made their first visit to the twin-island Federation in the year 2016, after which several ships, including – the Viking Sky, Viking Star and Viking Sun, have visited the island.

Racquel Brown, the CEO of the St Kitts Tourism Authority, cited that, “We want to thank Viking Cruises for their valued partnership & for including St. Kitts & Nevis on the itinerary of the Viking Orion’s inaugural season.”

The cruise passengers can tour several aesthetic places while their visit to the twin-island Federation, including – the historic and one-of-a-kind Brimstone Hill Fortress and National Park, Caribelle Batik, where the hot wax method of making batik cloth is still used or the St Kitts Scenic Railway, the last and only passenger railway in the West Indies.