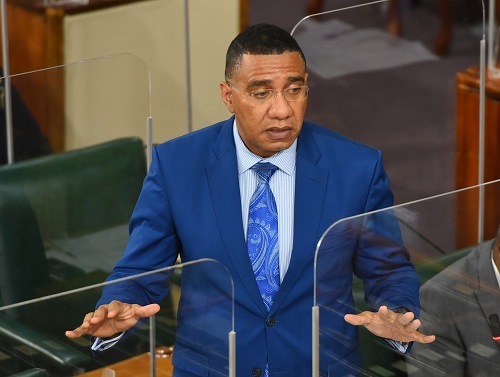 Kingston, Jamaica: Prime Minister Andrew Holness noted that his administration is making necessary efforts to tackle the flooding in some regions of St James, adding that the funds have already been allocated by the government to improve the drainage, especially in the north gully.

“Our government is already down that road as we have made allocations in the – “Montego Bay Perimeter Road Project” with the motive to undertake the studies for a proper drainage system for the region of St James. So, the funding is in – place for that & the work for that should start & indeed, that would be the – first step towards truly addressing this problem,” the prime minister stated while making a statement – to the House of Representatives on Tuesday.

Besides this, he added that plans are being made to tour the regions which have been severely impacted by the recent heavy rains.

The rainfall on November 8, 2021, produced showers over western parishes. The constant rainfall commenced after 2 am, which lasted for approximately 10 hours and produced 116.6 millimetres of rainfall, which was about 114.5 per cent of the 34-year mean for monthly rainfall for November, the prime minister highlighted.

He further noted that cumulative rainfall for the four-day period, from November 5 to 9, was 224.5 millimetres, which was about 220.5 per cent of the 34-year mean for November rainfall in St James.

“So, you would have flooding, and without having gullies sized for that kind of downpour, flooding and the subsequent destruction of property was inevitable”, the prime minister concluded.